ITU's Study Group 15, the body associated with transmission and networks, met in Geneva recently. One interesting statistic I heard during that meeting was that Question 13, the synchronization sub-group, receives as many contributions as some entire study groups. Synchronization is far and away the biggest “Question” within ITU.

This meeting we covered 98 individual contributions, and agreed 10 separate output documents. Most of those were amendments or corrections to existing documents, but there was one entirely new recommendation, the long-awaited G.8275.2. This document is the PTP Profile for Networks with Partial Timing Support. What this means is that it defines how to use the PTP profile to deliver time and phase across networks which may be wholly or partially unaware of the PTP protocol itself.

Up to now, the ITU has restricted itself to defining PTP support over networks where every network element (switch, bridge or router) contains a boundary clock. This boundary clock recovers the time and forwards it on to the next element in the chain, reducing the error that is introduced by the network. This model is known as “full timing support”, because every element of the network participates in the protocol to help distribute accurate time.

This new profile may be used across networks which don’t necessarily assist the protocol at every node. This is a big deal – it means that PTP can be used to distribute time across existing networks. So does this mean that PTP time distribution is set for a big expansion in deployment? Well – maybe! The protocol details may have been agreed, but the performance details are still to be finalised. What is clear is that getting time to the microsecond across the general network is a non-starter, even using this new profile. To get the best performance, the network must be carefully planned, and the sections that don’t have any timing support must be minimised and kept as short as possible.

That said, there is a provisional agreement on the overall performance target for the networks. Now the profile has been defined, we can start to get some detailed measurements of real networks and see how these measurements stack up against those targets. Watch this space! 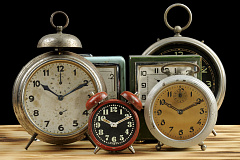